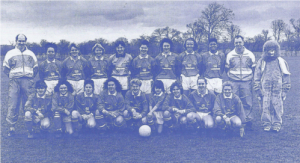 In an iconic final, Millwall Lionesses’ class of ’91 beat Doncaster Belles, the holders, 1–0 at Prenton Park to lift their first Women’s FA Cup. In the Greater London League they saw off Friends of Fulham and Arsenal to qualify for the first ever National League in 1991–92. With cult status assured, the team famously imploded and went their separate ways. Now the Women’s Football Archive opens the vault and looks back at the Lionesses squad from that memorable season.
END_OF_DOCUMENT_TOKEN_TO_BE_REPLACED

In May 1982 goals from Linda Curl (26) and Angela Poppy (58) gave Lowestoft their first WFA Cup, at the expense of Cleveland. The event was staged at a Football League ground for the first time, on – topically – a controversial plastic pitch at QPR’s Loftus Road in Shepherd’s Bush, London.
END_OF_DOCUMENT_TOKEN_TO_BE_REPLACED

Arsenal Ladies are an MK Dons–style FRANCHISE, put together in Islington, 1987.

END_OF_DOCUMENT_TOKEN_TO_BE_REPLACED

Women’s football pioneer Gero Bisanz has died of a heart attack aged 78. He was manager of the German women’s national team between 1982 and 1996.

END_OF_DOCUMENT_TOKEN_TO_BE_REPLACED

Nicknamed “Thunder” for her booming shot, England’s original centre-forward was small in stature but big in goals.

A deadly striker whose aerial prowess belied her lack of inches, Davies burst on the scene in a flurry of goals for England and the great Southampton WFC team of the era. In pre-National League days the WFA Cup was the only show in town – Davies’s Southampton side made it their personal property with six wins from the first eight tournaments.

Wendy Owen (2005) described Davies simply as “a centre–forward with a clinical finish.” While Saints team mate Sue Lopez (1997) hailed 5ft Davies’s “incredible ability to jump higher than players much taller than herself and superbly head the ball once she reached it”.

END_OF_DOCUMENT_TOKEN_TO_BE_REPLACED

Midfield enforcer Bagguley, 17, made it through the trials into Eric Worthington’s original England squad in 1972. She also played netball to a high standard.
END_OF_DOCUMENT_TOKEN_TO_BE_REPLACED

The death of Miss C.V. Richards: A tragedy felt right round the world

England booked their place at the 2015 Women’s World Cup this week, with a 4–0 win in Cardiff. Wales’s mad five minutes just before half-time saw them ship three ridiculous goals and turned the match into a tedious cakewalk. But events at another match in South Wales some 90 years ago had far greater import for the history of women’s football…

END_OF_DOCUMENT_TOKEN_TO_BE_REPLACED

We’ve all heard the lazy stereotypes about African goalkeepers (“naïve” “erratic”), and female goalkeepers (“rubbish”). Ann Agumanu-Chiejine is a living, breathing repudiation of both. One of Africa’s finest ever goalkeepers, the Nigerian’s athleticism and breathtaking acrobatic ability earned her five consecutive African Nations Cups with the Super Falcons, as well as a place at three World Cups and one Olympic Games. Here is her story…

The girl from Dublin who dreamed big – overcoming incredible obstacles to make her mark in international soccer. In the course of a long and successful career she won six Serie A titles, two Coppa Italia winner’s medals and etched her name into women’s football folklore.

END_OF_DOCUMENT_TOKEN_TO_BE_REPLACED

England’s under-19 team have been in Norway this past week, in UEFA Championship action, while next week the under-20s take centre stage at their World Cup in Canada.

Now a regular part of the football calendar, it is only in recent years that youth tournaments for women’s national teams came into being.