Thanks are due to friends and collaborators: Neil Morrison from RSSSF, Ian Nannestad from Soccer History magazine and Scottish soccer buff Stuart Gibbs.

Thank you to all readers and particularly to those legends, friends and family members who got in touch with kind comments – it meant more than you will ever know!

UPDATE: Check out our new project for 2020: A list of every woman to play soccer for Ireland.

For the Belles faithful, this must have been gut-wrenching to witness. The former Queens of English women’s football, reduced to such a pitiable state just three months after carrying off the WSL2 title.

During a summer of prolonged radio silence from the Belles, their League-winning players had one-by-one hotfooted it to rival clubs.

Fans’ fears were confirmed when an 11th-hour club statement tersely renounced their place in the new-fangled second tier ‘FA Championship’ for financial reasons.

And so it was that a completely unrecognisable young Belles side trotted out for this opening third tier (North) fixture at Rossington Main FC.
END_OF_DOCUMENT_TOKEN_TO_BE_REPLACED

LINCOLN CITY tasted Wembley glory this season, for the first time in their proud history.

Okay, it might ‘only’ be the Checkatrade Trophy (or The Auto Windscreens Shield, in old money) but the fans are on cloud nine and flocking back in real numbers.

Make no mistake, under the Cowley brothers this is a club that’s going places. If another promotion doesn’t happen next year then it’s surely in the post.

No-one could argue the players are world-beating individuals. But they pull together, they scrap, they play to their strengths and they’ve always got a plan.

Nicknamed the ‘Imps’ after the carving of a little goblin-type thingy on their magnificent cathedral, the football club is a barometer of the City’s fortunes.

In recent seasons there is no doubt that supine City have turned into the mouse that roared. But what of their women?
END_OF_DOCUMENT_TOKEN_TO_BE_REPLACED

Hristina Hristova: Bulgarian star who captained her national team and tore it up in Italy with Milan

For this article we’re widening the Women’s Football Archive net, to bring you a profile of Bulgarian great Hristina Hristova.

END_OF_DOCUMENT_TOKEN_TO_BE_REPLACED 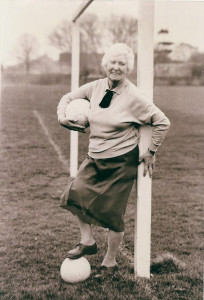 Review: Flo Bilton honoured by Hull City Council as part of their launch of International Women’s Week and the Lord Mayors Personal Legacy Project through the unveiling of 100 Centenary Plaques, Monday 5th March 2018.

END_OF_DOCUMENT_TOKEN_TO_BE_REPLACED

Well, Maria Lúcia Alves Feitosa is a bona fide person of interest to women’s football historians of every stripe.
END_OF_DOCUMENT_TOKEN_TO_BE_REPLACED

Denmark too strong for Ireland in Dublin 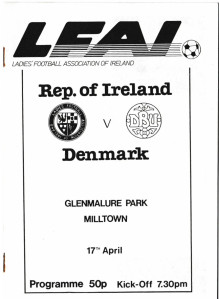 As Martin O’Neill’s boys in green battle Denmark for a place at the 2018 World Cup in Russia, we’ve delved into the archives to profile this women’s match from April 1985. Irish fans hoping for encouragement may wish to look away now!

END_OF_DOCUMENT_TOKEN_TO_BE_REPLACED

PSST, word to the wise… everyone knows that GOSSIP is the single most destructive force in the universe. I know it, you know it, even the cats and dogs in the street know it.

And if nothing else women’s football clubs are veritable lightening rods of gossip.
END_OF_DOCUMENT_TOKEN_TO_BE_REPLACED

A striking prodigy from Leeds who burst on the scene in a flurry of GOALS. She blasted a sensational debut hat-trick – England’s first ever – against Scotland in June 1973. At club level she helped Foden’s wrest the WFA Cup crown away from Southampton in 1974, then returned to Yorkshire with the ever-improving Doncaster Belles in 1976. After nine goals in 11 England caps, a series of debilitating knee injuries saw her retrain as a goalkeeper and turn to coaching. As a pioneering female player/manager she passed her FA Preliminary licence and took both Rowntrees and Bronte to the WFA Cup semi-finals. In January 1987 she was appointed as Yorkshire and Humberside regional coach, the first woman to hold such a senior coaching role within the old WFA setup. She also coached the Welsh national team during the 1980s.