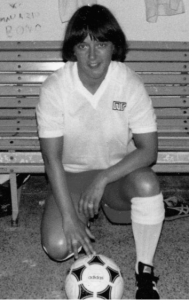 Today, Carol Thomas remains the forgotten and overlooked captain of the England women’s team (excluding this website of course!) yet she is still the most successful and second longest serving captain to date. Her achievements, which would be remarkable even by today’s professional standards, in an era of little funding and scant recognition, can only be described as truly extraordinary. Her willingness to return to the grass roots of the game for over 16 years, under the radar of women’s football’s high level administrators, following a glittering international career and after the birth of her two sons, highlights a true football devotee.

END_OF_DOCUMENT_TOKEN_TO_BE_REPLACED

On a cold Monday night in November BBC Radio Humberside pulled off a significant coup, securing Carol Thomas as the guest in their 6pm nightly ‘Sports Talk’ phone-in. In trying her hand at punditry Thomas proved herself an eloquent standard bearer for women’s football and sport in Hull. The episode link was here, but sadly is no longer available.

END_OF_DOCUMENT_TOKEN_TO_BE_REPLACED

Ireland lost one of its best ever sports stars with the untimely death of Anne O’Brien in August 2016. Medals and memories from a stellar pro career in France and Italy cemented her unique legacy to Irish sporting heritage. The tragedy is that she has been lost with parts of her amazing story still to be told, and without getting the proper acclaim her achievements merited.

END_OF_DOCUMENT_TOKEN_TO_BE_REPLACED

Southampton WFC great Maggie Pearce is the only player to start both England’s first ever match in 1972 and the UEFA Championship final 12 years later. At 15 she was the youngest player to make it throught the trials into Eric Worthington’s inaugural Lionesses XI. Cool and unflappable, she was an essential component of two great England teams and the all-conquering Saints. Pearce formed a formidable full-back partnership with starboard-sided Carol McCune/Thomas and successfully transplanted her understanding with Southampton lefties Sue Lopez and Pat Chapman to international level. She bounced back from the birth of her first daughter to round off a 40-cap career.

END_OF_DOCUMENT_TOKEN_TO_BE_REPLACED

Considering Lorraine Hanson was such a brilliant footballer for Doncaster Belles and England, there is next to nothing about her on the internet. After starting out in her native Nottinghamshire with Carr Fastener and Nottingham Rangers, she joined Doncaster Belles in 1977 and became a key part of one of the most successful English club teams ever assembled. Equally capable at centre-forward or at centre-half, Hanson made around 30 appearances for England and played in the 1984 UEFA Championship final.

END_OF_DOCUMENT_TOKEN_TO_BE_REPLACED

First, an apology: until now the entire Women’s Football Archive project has been a pathetic joke. That’s because it has purported to tell the story of women’s soccer in England… with hardly any mention of Pat Gregory! This article is a small step towards putting that right.
END_OF_DOCUMENT_TOKEN_TO_BE_REPLACED

In June 2016 England blooded two new Lionesses in the shape of Rachel Daly and Nikita Parris, who both made their debuts in a 7–0 cakewalk against hapless Serbia. Some 35 years earlier England also handed out a double debut, to Gillian Coultard and Angela Gallimore, in this match with Ireland at Dalymount Park. In their first visit to the Emerald Isle, England eased to a 5–0 win. But Ireland’s team sheet included a star name of its own: Veronica “Ronnie” Guerin wore the famous green shirt before she turned into a leading journalist, got tragically gunned down and became the subject of a Holywood blockbuster…

END_OF_DOCUMENT_TOKEN_TO_BE_REPLACED

In August 1984 Italy beat West Germany 3–1 in the 1984 Mundialto Femminile final. A capacity crowd at the Stadio Armando Picchi in Jesolo saw goals from vaunted front three Carolina Morace, Rose Reilly and Betty Vignotto put the Italians ahead, before West Germany reduced the arrears in the second half through Anne Kreuzberg.
END_OF_DOCUMENT_TOKEN_TO_BE_REPLACED